We have included sample video training on SQL Server 2014. In addition, we have briefly explained the topics covered in the MS SQL 2014 training videos. You can download these FREE video and review them on your computer. (Right click – Save As)

In this SQL Server 2014 FREE training, we start by going over the hardware and software requirements for SQL Server 2014 installation. Next we run the Setup.exe which will launch the SQL Server Installation center. Before any software is installed, you have to make sure that Setup Support rules and files are installed.  After that we are going to choose a set of options including stand-alone SQL 2014 installation, feature selection like database engine, SSIS, management tools, authentication choices, security role consideration, data and log file location. We highlight the best practices that are used by the IT industry.

In this SQL 2014 training, we are going to show you how to create a database and a table in SQL Server 2014 version. We use two different ways to do this, SQL Server Management Studio and Transact SQL also known as TSQL. Using SSMS we create a School database and pay particular attention to the file locations and Auto growth parameters for MSSQL 2014. We move on and create HR database using SQL command and enter specific values for data and log file locations. Next in SQL 2014 FREE tutorial, we go ahead and create SQL 2014 Server tables which consist of columns and rows. The Database instructor discusses important considerations like data type, field size, primary key and foreign key constraints.

This FREE SQL Server 2014 training video tutorial discusses new features in SQL Server 2014. We start with a Contained Database which is a specialty db that is isolated from other SQL Server databases. This addresses the problem of migrating a database from one SQL Server to another. Next thing we discuss is SQL Server 2014 FileTable, which is a specific table that stores file and directory information from a network drive. This is built on FILESTREAM Technology from MS SQL 2008. Using FileTable, you can access metadata file level information which can be beneficial for applications manipulating input and output files with SQL Server. Next we move onto ColumnStore index that is specially built for high performance in a MSSQL data warehouse system.

A SQL join facilitates in bringing data together from various tables. In this MS SQL 2014 free demo training, we go over basic concepts like Primary key, Foreign key, Inner and Outer joins in SQL Server 2014. An INNER JOIN is used to pull matching data from two tables; this concept is highlighted using Venn Diagrams. We do a demo on Inner join using Customers and Orders tables in SQL Server 2014. Next we cover OUTER JOINS in the SQL Server training, which help you find non-matched data between tables in SQL Server 2014. The two types of outer joins are Left outer join and Right outer join. Using a Left outer join in SQL 2014, we find out Customers that have not bought our super Products yet by using a WHERE clause Orders.Customerid=NULL.

In this video training provided FREE by SQL Server 2014 Tutorial, we cover new features in SQL Server 2014 from TSQL point of view. We start New Transact SQL features in 2014 with Sequence. A Sequence object is an object that provides functionality similar to Identity (Autonumber) column. Next we go over new datetime functions in SQL Server 2014 training. We demonstrate DATEFROMPARTS, TIMEFROMPARTS and EOMONTH functions. The brand new OFFSET clause in MS SQL 2014 is discussed with Northwind database, here you can skip rows from your complete recordset by an Offset value. New Logical functions Select CHOOSE and Select IIF (Inline If) are covered during SQL Server 2014 tutorial 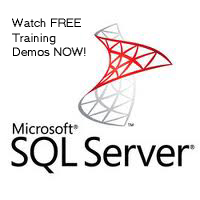